Benton was referred to the YourVets Surgery Service for removal of a tumour that was growing on his elbow. 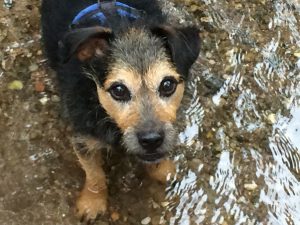 The referring vet had determined the tumour was a soft tissue sarcoma, which is a type of mass that is unlikely to spread remotely, so prognosis is good if complete surgical removal can be achieved. The location made this challenging, however, as to achieve complete removal it is necessary to cut out not only the tumour itself but also a margin of normal tissue around the edge, to make sure there is no chance any tumour remains. 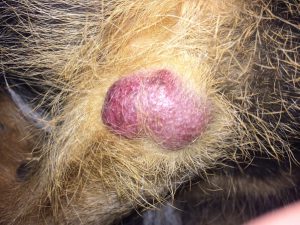 Figure 2: the tumour on Benton’s elbow

There is limited skin on the legs and attempting to close a deficit left by a lump removal can cause a tourniquet effect and prevent normal circulation to the lower limb, or the stitches may just be too tight and pull out. This is compounded because in a location close to a joint even more skin elasticity is needed to allow the skin to move when the joint is flexed or extended. To overcome this, it was necessary to “borrow” some nearby skin to close the deficit without limiting the amount of skin to retain normal elbow motion and circulation to the rest of Benton’s leg.

The technique chosen was an axial pattern flap. This technique utilises an area of skin supplied by a single blood vessel, which means a relatively large area of skin can be elevated, rotated, and stitched into a new position as long as the blood vessel that supplies it is preserved. It requires a very careful surgeon! In Benton’s case, a flap of skin from along the side of his ribcage (a thoracodorsal axial pattern flap) was rotated down his leg to close the gap left after his lump removal and stitched into place. After surgery, a drain was placed to prevent fluid build-up under the flap, which remained in position for about a week while the skin grew attachments to the underlying tissue in its new location. 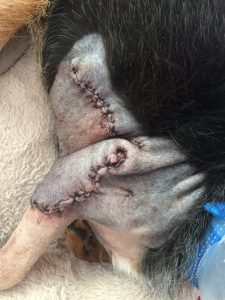 Benton was kept in hospital overnight after his big operation so he could be administered pain relief and local anaesthetic into the surgical site. His stitches remained in place for just under 3 weeks. Once they were removed, Benton just had to wait until the fur grew back and went on to make a full recovery! 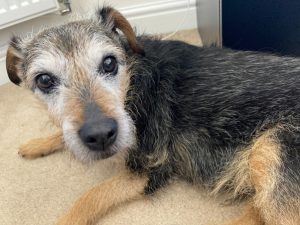