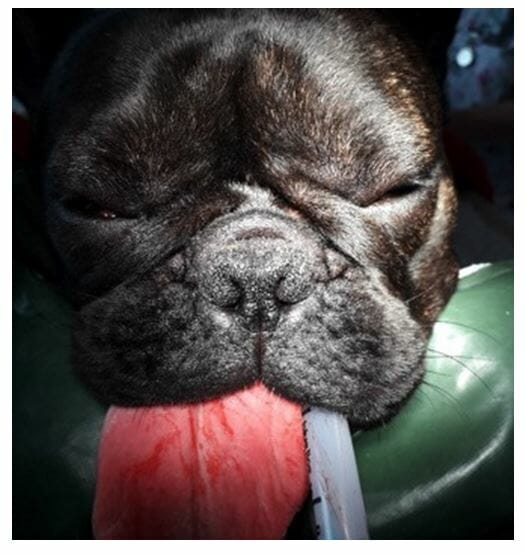 Missy is a 1 year old French Bulldog. Her owners requested a referral to YourVets Surgery Service because they noticed that she sometimes has difficulty breathing. Missy had an appointment with Kathryn, the vet, who diagnosed her with Brachycephalic Obstructive Airway Syndrome (BOAS).

BOAS is a condition that commonly affects dogs with a short-faced conformation such as French and English Bulldogs, Pugs, Boston Terriers and Shih-Tzus. The word ‘brachycephalic’ literally means short-nosed. The syndrome is caused by excess soft tissue in the nose and airways, because the shortened skull does not allow space for all of the structures found in a normal dog’s nose.

Dogs who suffer with BOAS usually have some combination (often all) of the following conformational problems from the time they are born: narrowing of the nostrils, extra tissue within the nasal passages, an overlong soft palate that sometimes occludes the top of the airway, and an underdeveloped and narrowed windpipe.

All of these factors act to make it harder for the patient to draw air past the upper airways into the chest, which can cause secondary collapse of the larynx (the structure at the top of the airways) and tonsils, as well as sometimes causing heartburn and reflux by drawing the top part of the stomach forward into the chest cavity.

Symptoms of BOAS include a snoring sound when breathing, difficulty tolerating exercise and hot weather (excessive panting and needing to lie down a lot) and regurgitation or vomiting after eating. Severely affected dogs can sometimes get so out of breath they collapse, and are vulnerable to developing heat stroke as they cannot pant to cool down efficiently.

The symptoms of BOAS can sometimes be relieved by performing surgery to help to reduce the presence of some soft
tissues in the airways. It is possible to trim the over-long soft palate, remove the tonsils and laryngeal folds if they have collapsed, and to widen the nostrils.

Some specialist centres can also use a laser to remove some excess tissue from inside the nasal passages, but this technique is not widely available. No surgery can make the windpipe and nostrils in BOAS-affected dogs as wide as a normal dog, so patients remain affected and must be managed all their life. However, studies show quality of life and welfare are much better in dogs with BOAS who are proactively treated. 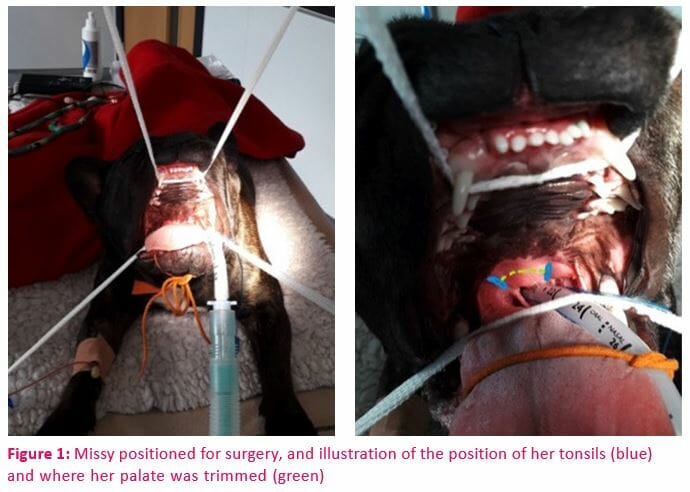 Missy’s owners were keen to do everything they could to help to make her better, and she was booked in for surgery.
Missy had her palate trimmed, tonsils removed, and her nostrils widened. After surgery she was hospitalised overnight for monitoring to check the tissues of her airways didn’t swell, as this can be a dangerous short-term complication of surgery, which can be fatal if a vet is not on hand to administer life-saving treatment if it occurs. 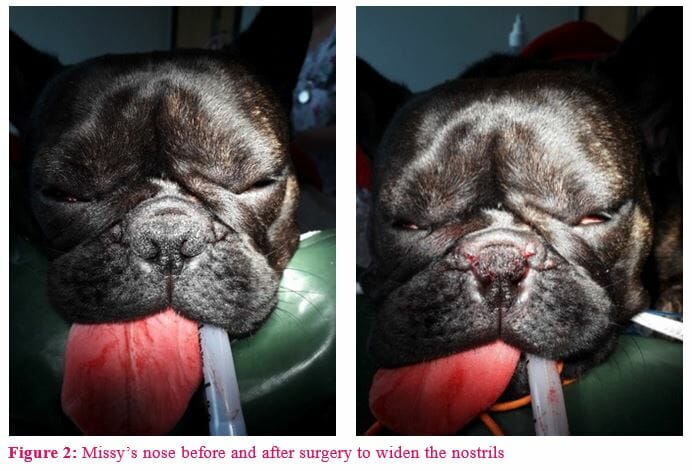 The Smethwick out-of-hours service means a vet and veterinary nurse are looking after our inpatients 24 hours a day, so Missy didn’t have to be left alone at all during the risk period of her recovery. Luckily, she had no complications at all, and went home the next day.

After surgery, Missy didn’t eat anything for 24 hours to allow the tissues at the back of her throat to heal, and after that was only allowed soft food for 7 days. She wasn’t allowed to do any exercise or get out of breath for 10 days after surgery. By that time, her airways had completely healed up, and her owners noticed she was breathing better and no longer snored as much when she was asleep.

Missy’s surgery was a success, and she made an excellent recovery. In the future, her owners can help her to cope with her condition by making sure she keeps slim and fit, and by avoiding exertion or stress during hot weather – for example, walking her early in the morning or late in the evening during summer.

COVID-19 Update
We are working safely and will continue to provide care for your pets during the COVID-19 pandemic including local and national lockdowns. To help us with our new ways of working and to keep us all safe, please do not attend the practice unless you have called us first and have a pre-booked appointment. Thank you.
Order repeat prescriptions
X