Luna is a six-year old tortoiseshell cat who has belonged to Karen since being rescued as a kitten. She has been a patient at YourVets Smethwick since June 2018.

On 27th March Karen came home to any owner’s nightmare. She found Luna hidden in the back of her wardrobe, covered in blood and unable to stand. Luna was rushed straight into YourVets Smethwick for emergency treatment. On arrival, she was immediately triaged, and the vets suspected she had been hit by a car due to the nature of her injuries. She had some minor wounds to her head and all four feet, she was in shock, and it was obvious her right back leg was seriously injured.

Karen left Luna with the dedicated emergency team for overnight stabilisation of shock, and once the vet felt Luna was stable enough for further investigations she was sedated. X-rays showed that her right hip was completely dislocated, and her right hock (ankle bone) was fractured and dislocated too. Luna was kept hospitalised and on powerful pain relief until she was well enough to undergo surgery to repair her badly damaged leg.

Two days later, Luna was well enough for surgery, and was transferred to the care of the YourVets Surgical Referral Service at Smethwick. She underwent a ‘toggle’ procedure to replace her hip into its socket. The hip is a ‘ball and socket’ joint. During a ‘toggle’, a hole is drilled through the top of the thigh bone, exiting through the ‘ball’ of the joint, and another through the ‘socket’ in the pelvis. A suture is then passed through the hole and secured with a small metal clip, and used to reduce the joint back to its normal conformation then tied tight to hold it in place.

The hock joint was much more complicated to repair. The hock joint is actually three movable joints, involving a total of total of thirteen bones! Poor Luna had suffered rupture of the collateral ligaments which usually stabilise the hock joint, and so reassembling all the bones into the right places was like completing a very intricate jigsaw. 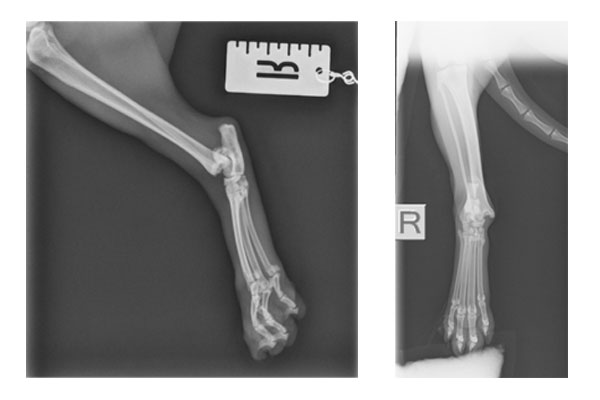 Once the joint was reassembled, small screws were placed into where the ligaments that used to support the hock would have attached to the bone. These were then used as anchors to place sutures to stabilise the hock as the ligaments would have done. Once Kathryn, the surgeon, was happy with the placement of the sutures, she needed to prevent the joints of the hock from moving at all for at least four weeks to allow Luna’s body to reinforce the repair by laying down scar tissue over the implants. To achieve this, she placed a transarticular external skeletal fixator, in which metal pins are passed through the bones above and below the joint and secured to a metal frame beside the leg to hold them still.

X-rays taken after surgery confirmed the implants were correctly positioned to give Luna a good chance of being able to use her leg again.

In total, Luna was in theatre for around four-and-a-half hours.

Luna was sent home to be confined to a small area and allowed only restricted exercise on one level, with no furniture to jump or climb onto. In fact, Karen ended up turning thte pantry into Luna’s den during her recovery!

Luna came in to see Kathryn every week, and was comfortable and putting weight through her operated leg by three days after surgery. In fact, she felt so good that the main challenge was keeping her entertained during her period of confinement, and stopping her from becoming too depressed.

After her external skeletal fixator is removed at four weeks, Luna will have a further two to four weeks of confinement to check she is coping on her reconstructed joints before she can be allowed back out to visit her normal neighbourhood haunts.